One of our goals at Bald Girls Do Lunch is to make our network highly educated and conversant about their alopecia areata. We’re here to keep you in-the-know with accurate information about your condition including clinical trials. When headlines hit the media with word combinations like alopecia, research, clinical trials and drugs, we want to help you understand them and keep them in perspective.

Recently, JAK inhibitor drugs FDA-approved for use in treating a severe bone marrow cancer (myelofibrosis) were given orally to patients with moderate to severe alopecia areata in an ongoing study to test their safety and efficacy.

We know first-hand the frustrations of patients who are on the receiving end of advice and suspicion from friends and family: are you sure you’ve been to the best specialist? Wow, have you seen this new ‘discovery’? Don’t you want to try something to regrow your hair? Equally, we know, too, the sadness that envelopes the deafening silence of guilt, the dark hole of secrecy and the garden variety of social discomforts short-circuiting the happiness of women with alopecia.

That’s why we want to arm you with information and news you can use regarding these treatments. With our blog, we hope you’ll be better equipped to answer questions, and feel confident to do more than simply shrug off questions.

This week, we’ve pulled together a summary about one of these drugs, ruxolitinib, (brand name Jakafi®). It was used in the open-label, ongoing alopecia drug treatment study co-lead by researchers Raphael Clydes, MD, PhD and Angela Christiano, PhD at Columbia University Medical Center. In 2014, being informed is especially important because of the online publication of the doctors’ research in Nature Medicine widely circulated with much media attention. The published report in Nature Medicine details the study and reports that three study subjects regrew hair. If their hair growth will continue without the drug is not known. If they will suffer serious side effects is also unknown. Results on the other nine subjects has not been published. 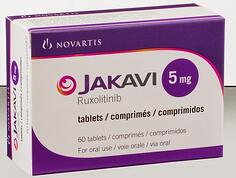 JAK inhibitors marketed by Incyte and in partnership with Novartis and Eli Lilly drug companies are small molecules aiming to reduce inflammation. In the case of alopecia areata, an inflammation at the bulb of the hair follicle interrupts the normal hair-growing phase without destruction of the follicle structures themselves.

To broaden our understanding of the wide range of information our community hears, we assembled a variety of headlines from online sources.

Adding to the mix, levity arrived in the form of the Editor’s top pick from over four dozen reader comments to a New York Times’ article, with Times’ editors selecting

“I’ll stick to being bald … I need my liver to drink beer.”

On the serious side, the readily available patient-focused statement in the online patient recruitment flyer from the Columbia University Medical Center (CUMC) research team states: “This is an oral medication which has been used to safely and successfully treat other diseases, and is now being newly tested for treatment of Alopecia Areata.” After publication of the Columbia study results in August 2014 in which 3 of 12 original subjects had been in treatment long enough to regrow hair in five months, study co-leader Dr. Raphael Clynes, (formerly in Columbia University Medical Center’s Department of Medicine and a director in the Columbia Center for Translational Immunology, currently with Bristol-Myers Squibb) was quoted: “We still need to do more testing to establish that ruxolitinib should be used in alopecia, but this is exciting news for patients and their physicians.”

Another additional source quotes Dr. Clynes ” …..an expensive therapy that’s probably effective based on the small number of patients that we’ve treated, and it’s likely to have a reasonable safety profile. But there’s no way that I can endorse it fully unless we do a larger trial.”

When Dr. George Cotsarelis, renowned dermatologist and hair researcher from the University of Pennsylvania expressed caution about ruxolitinib he summarized the situation by saying that drugs that suppress the immune system not surprisingly would work for alopecia areata, but he also said that the subjects were “treated systemically with a very toxic drug” that can produce serious side effects including infections, blood and liver problems. Dr. Cotsarelis said “this would be an amazing breakthrough” if it could be applied topically. Until then, “Patients are going to rush in demanding this treatment, and I would not give it.”

Rita Rubin, journalist for WebMd Health News interviewed several of the principal parties in this study including Angela Christiano, PhD, an acclaimed researcher and professor in the departments of genetics and development at CUMC and Dr. Raphael Clynes.

Excerpting from Ms. Rubin’s Q & A WebMd feature (Drug Restores Hair in Some With Alopecia; FAQ) Drs. Christiano and Clyde talked about their research:

Q: What are the side effects?
A: The labeling for the drug lists a number of serious potential side effects, such as low blood counts and infection. More common and less serious side effects include headache and dizziness, according to the labeling. Clynes says one person in his study has had “a touch of anemia.” The side effects may be worse in people with underlying and chronic illnesses, he says. And ruxolitinib probably does suppress the immune system, putting people at risk for infections.”

Q: Why would anyone take a potentially risky medication for months just to regrow hair?
A.” This is a group of patients who’ve really had nothing.” says Christiano who was diagnosed at age 30 in 1996. “There’s no FDA-approved treatment. They’re desperate for something that works.”

Q: When the people in the study stopped taking ruxolitinib, did their hair fall out again?
A: Scientists are continuing to check their hair growth every couple of months. It’s plausible that the drug could have a permanent effect, Clynes says. On the other hand, the drug might have only put the disease into remission, so it could eventually come back and cause hair loss.”

Q: Wouldn’t it make more sense to rub the drug on the skin where yiuo’d like to grow hair, rather than swallowing it in a pill?
A: “It would be wonderful to have both an oral and a topical version of a drug that could cause hair to regrow in alopecia areata patients” Clynes says. But no topical form of ruxolitinib or tofacitinib has been approved for human use, so he and Christiano mixed up their own with ingredients from China and tested them on mice with excellent results.

JAKs are part of a family of enzymes that block certain proteins that influence the intra and inter-cellular activities of cells especially those activated in inflammatory and immune conditions. Ruxolitinib was already approved for use in humans as a treatment for bone marrow cancer (myelofibrosis) when it was used experimentally as both a topical and a systemic drug in a strain of mice who are bred with susceptibility to alopecia areata. Cream and pills were used on mice; pills only were used on human subjects in the Columbia University studies.

Although overall this is exciting news, it appears as though our community would benefit from further testing before rushing to their doctors to receive this type of treatment as Dr. Clynes has said. We know just how easy it is for friends, family, and even those of us with alopecia to get caught up in headlines, but at this point with so many things unknown about these treatment options it is sobering to hear reminders from physicians that there is still a long way to go before a safe, reliable treatment option is widely available.

***Disclaimer: While all attempts have been made to ensure accuracy, the author of this blog is not responsible for the inadvertent misquoting of original sources obtained by third party news outlets. We also encourage the doctors mentioned in this article to clarify any quotes attributed to them that were mis quoted by news sources.***