She shares how she takes charge over her alopecia and offers advice on how you can, too

Christine Wigandt of Massachusetts has shared with Bald Girls Do Lunch how she handles crises of confidence.

Now she talks to us about a catty coworker who bullied her on Social Media, and two distinctive communities—work and the gym—where she enjoys strong, ongoing support. 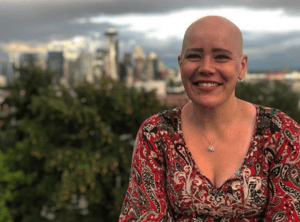 The World Before Alopecia and After Alopecia

“The diagnosis of alopecia areata is a hurdle, especially an adult diagnosis,” says Christine, who was diagnosed at 21.

She says her alopecia was triggered by the stress associated with her mother’s dying, a cruel one-two punch. She was also enrolled in strenuous EMT training.

“I have very few people left in my life who knew me as ‘Christine with hair.’ Many people I’m close to now don't know me as anything but bald.”

Christine, who’s been completely bald for four years has been working as an EMT. She’s never worn a wig in the workplace—even though she’s occasionally been called ‘sir.’ She’s chosen to be forthright about her alopecia.

During her EMT training, Christine told her instructors that her baldness was the result of alopecia, an autoimmune disease. That choice to be candid has kept her from being bombarded with questions on a daily basis.

It was a successful tactic she had employed before. When she was working at the DMV, she kept the Bald Girls Do Lunch cards on her desk as a “conversation starter.”

Christine views alopecia as just another form of diversity in the workplace.

“Although I may be judged every time I walk into a room for being different, I don’t feel like I need to explain or justify myself.”

Christine follows the golden rule: treating others the way she’d like to be treated. Her EMT colleagues have been really receptive to her baldness. That’s why one really nasty episode of bullying blindsided her.

“A female coworker made some hateful comments about my alopecia on Facebook,” Christine recounts.

“We had worked a shift together. It was busy, but nothing remarkable happened. When I got home, she had posted on Facebook, "Bald-headed bitches always be having an attitude, must be because they don't have any hair rubbing up against their shoulders...”

The attack shocked and stung Christine.

“I'm not going to lie, it hurt for a minute,” she says. “Then I took a step back and looked at how far I've come in this journey. I realized that the word she left out was ‘confident’ in her statement about me being a ‘bald-headed bitch.’”

Christine’s colleagues stuck by her.

“Honestly, it boosted my confidence.”

Another confidence booster is Crossfit.

Christine defuses daily stress and alopecia anxiety at the gym. She credits workouts with providing much-needed balance and positivity in her life.

“I’d always struggled with my weight,” Christine says. “My mom was dead, I’d lost my hair. I was damned if I was going to be fat and bald.”

She remembers when she first joined.
“When I walked in there were so many people. The music was so loud. I had to sign a waiver about my health conditions—my alopecia.”

Christine didn’t want to be treated differently—and she wasn’t. Instead she found a supportive community.

“Crossfit is the most consistent thing I’ve stuck with in my life,” she says. “It saved me. It helped me find myself. It’s who I wanna be: a bald, strong woman. Nobody cares what you look like. We’re all here for the endorphins and we all build each other up.”