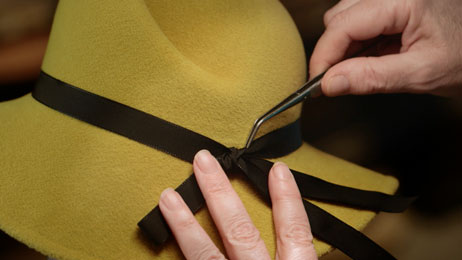 Our post today shows the short documentary Pinkham by Cineastas. That the Portland, Oregon milliner at the heart of the film, Dayna Pinkham, is a woman with alopecia universalis is only one reason to watch. Enjoy our interview with Cineastas film director, Tristan Stoch, and the film!

How did inspiration for Pinkham come about?

Tristan: Sean (Cineastas co-founder) and I actually approached Dayna a few years ago when we were starting our video production company. Pinkham Millinery, her story and her personality stuck in both of our minds and when we had some free time we knew exactly who we wanted to do a documentary on. “Pinkham” was a passion project that allowed us to return to our roots.

Was the concept initially to film a female entrepreneur in Portland, a bald woman or something else?

Tristan: We first learned Dayna has alopecia when we walked into her shop. There are so many levels to her story. She's a Portland legend. Her hats have been worn by rock stars, actors, and professional athletes, and can be seen at many weddings and horse races around the world. Most importantly, she seemed like a nice person with an interesting story to tell.

Do you consider yourself a ‘hat person’? Was there a hat at Pinkham Millinery that called out: "Wear me!"?  My mom loves hats so I grew up with a 'hat person' and appreciate them.  I think I could look good in a Panama hat.

Were there moments in the shoot when you just knew THIS is going to make the final cut?

Tristan: Definitely whenever Dayna started giving advice directly to Sean or I. She has had such an amazing life and a non-traditional career path we can’t help but be inspired by her. The audio sound bites at the end where she is talking about patience and not letting fear take hold was advice directed to Sean and I. As young artists, it was good to hear.

What's up next for you and Cineastas?

Tristan: We are exploring some possibilities for a future short documentary film, but we are going to move away from profiling a craftsperson for our next one, because it will be good to try something new.

Did you always know you wanted to be a cinematographer?

Tristan: Not really. I got into film because I was filming skate videos for friends back in the day. Sean got into filmmaking in high school and developed his photographic eye in college.

What do you hope your audience will get from this documentary?

Tristan: I hope they get that if they follow their bliss, life will lead them on a true course. That’s what I got out of my time with Dayna.

Our sincerest thanks to Tristan Stoch and his talented team for telling us about his company, his career and for creating Pinkham  -  an inspiration for all women with alopecia areata to share and promote alopecia awareness.

Are you a woman with alopecia in Portland? Join our List.