Experimenting with Xeljanz: Is it for me?

Lately, volunteering to be the subject in a treatment trial with Xeljanz is on the minds of women with severe hair loss from alopecia areata. You're not alone in wondering about this very personal decision. In other posts, we've discussed  clinical trials in general and posted additional original articles about Xeljanz, a Janus Kinase inhibitor (JAK). We have interviewed parents and fielded many calls and emails on this subject.

This week we have the pleasure to share our interview with 27 year-old Melissa who had this talk with her own physician and came to a joint decision with him. 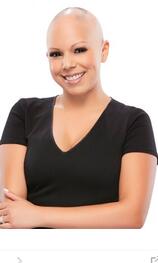 Melissa was diagnosed with both rheumatoid arthritis and alopecia areata at age two. Over the past 25 years years she has tried various treatments. At times her hair has grown in completely, only to then fall out again. Her pattern of hair loss has been variable with lots of bald spots and random absence of an eyebrow, eyelashes and body hair. She is the only person in her family with an autoimmune disease.

CHOOSING TO HELP OTHERS

Thea: When you heard about the Yale University physician's report about his male patient taking Xeljanz for both plaque psoriasis and alopecia universalis, do you remember your initial reaction?

Melissa: Oh geez. Another thing that makes your hair grow back and doesn't work. I was at a point in my life where I've tried everything to make it grow; they were all promises that never really worked. What caught my eye this time was that they were using a Rheumatoid Arthritis drug. Since I have RA, it made me wonder more.

Thea: Did friends and family weigh in?

Melissa: Family and friends sent information. It was actually annoying considering that I am completely confident with myself being bald. I know they were just trying to be helpful so I understood. I do hair for a living. I do hair for people with my condition as well as other hair loss issues. My colleagues all know about my hair.

Thea: How did your own physician respond when you mentioned your interest in Xeljanz?

Melissa: I actually didn't want my hair to grow back but our plan was to stop methotrexate for my RA at the end of December 2014 because I'm getting married in May and want to have kids right away. So we decided just to try it for 5 months to see if it really works in addition to my current medication.

I chose to try it to help others not for my own personal need of hair.


Melissa: The last time I had taken medication for my RA was when I was 20, seven yers ago. I decided after taking it for 6 months that I didn't want to continue. I hate taking medication and disliked that I was on such a high dose and on many different ones. I changed my diet to see if my RA symptoms would change and they did for a small period of time. In June 2014 I had a flare up and started Methotrexate once a week.

Thea: You were already on Methotrexate when you talked to your physician about Xeljanz?

Melissa: Yes. He didn't think it was a good idea to try Xeljanz drug just to see if it really worked, but I convinced him to let me try it. He warned me of the side effects, but we were only trying this combination for five months. He was just as curious as I was to see what would happen. After taking Xeljanz for five months, my scalp, eyebrows and eyelashes grew in.

I've been off the meds for more than a month now and while my hair is still the same (just getting longer) I'm assuming it will fall off soon.

Thea: Did you have side-effects?

Melissa: My cholesterol was high the first time I did blood work. Then I changed a few things in my diet, added more exercise and it went back to normal. Acne was there the whole time I was on the meds and cleared up right away once I got off them.

Thea: Did your physician offer an opinion about future treatments?

Melissa: He did say we could always try Xeljanz again if I wanted my hair back. 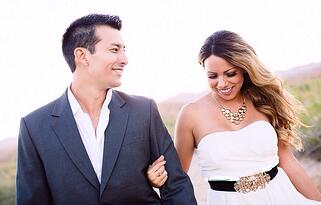 Thea: Congratulations and best wishes for your upcoming marriage!  Tell me what your fiancee has said or done that's especially helpful.

Melissa:  Shawn has been amazing during this time. When we first started dating, I didn't know how I was going to tell him. Initially, I told him what I did for a living. I figured I can gauge how he would take it based on his reaction to what I do for a living — helping people with hair loss. I remember being really nervous. I remember that after a month I began to tell him about my alopecia and he said he already knew. I was shocked but he said he put two and two together seeing how passionate I was about my job and in my details about alopecia. "It wasn't a big deal" he said.

Thea: What's your advice for other women thinking about the timing while dating?

Melissa: When I met my fiance I had patches all over so I just shaved what I had and wore custom wigs. I really believe when dating with alopecia it's better to talk about it in the beginning. It's not a first date convo, but maybe a month or so or a couple of dates in. It makes it tough when it's later in the relationship because you can't really be comfortable around that other person. Shawn and I are getting married in May and I couldn't be happier!

We hope you enjoyed hearing about Melissa's experiences. Let us know about yours!